ELKHART — About 100 leaders from around the state of Indiana and as far away as Colorado joined us for HEA’s first ever Summit on Modern Youth Apprenticeship March 9-10 at the Crystal Ballroom in the Lerner Theatre, downtown Elkhart. 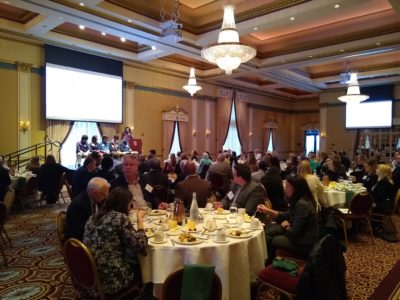 As Elkhart County has embarked on the first year of its journey toward a full system of youth apprenticeship, HEA has brought together partners from the business, education, nonprofit, and government sectors to build on models from other successful apprenticeship programs and build new pathways forward when needed. The summit was a way to share the learning and growth that’s taken place here and elsewhere as we’ve worked to craft this new approach to education and career preparedness.

“The emergence of modern youth apprenticeships in Elkhart County is at the intersection of a national movement and the relationships built locally to enable innovative talent solutions,” said Jason Harrison, VP of Pathways at HEA. “Through partnerships with educational leaders and industry champions, we are building a new system for our future.”

In his position at HEA, Harrison has been instrumental in establishing the key partnerships at the heart of what is now known as CareerWise Elkhart County, an HEA-led initiative built on the CareerWise Colorado model of modern youth apprenticeship. Representatives from CareerWise Colorado, the Indiana Talent Network, Ascend Indiana, CELL, LIFT, Ivy Tech Community College, the Governor’s Workforce Cabinet, the Community Foundation of Elkhart County, local chambers of commerce, public high schools, regional employers, government entities and elected officials, and many other partners attended and participated in presentations during the two-day event.

Those partnerships are crucial to the success of this ambitious initiative, and summit attendees also traveled to local business sites to talk to some of the first youth apprentices in this new countywide system, including Bryce Castro, a senior at Elkhart Central employed as an IT apprentice at Goshen Health. 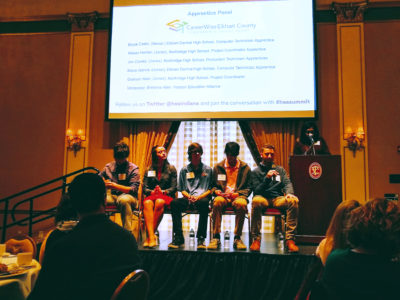 “I don’t think there’s any doubt that I should be doing this, and I know my mom is proud that I was taking the initiative to take on this responsibility and work toward making something of my life,” he said at a Q&A session.

Through CareerWise Elkhart County, students can apply for Department of Labor-approved apprenticeship positions at local employers as early as their sophomore year (grade 10). If hired, they start a three-year commitment to work half-time at their new employer while attending school half-time. Over the course of the three years, apprentices earn wages, high school credit, and where applicable, they have the opportunity to earn college credit and professional certifications related to their chosen field. Employers are able to craft their own talent pipelines and cultivate future leaders for their workforce.

One such employer, Kem Krest, has taken that opportunity to its fullest with its first youth apprentice, Graham Neer, a Northridge High School junior. Amish Shah, the President and CEO of Kem Krest, told summit guests at his facility that he worked a number of different jobs in his father’s company when he was young, and he felt that experience gave him a leg up on his peers because he had a professional perspective on many facets of how a company is run. That personal experience led Shah to want his company to be a pioneer for modern youth apprenticeship in Elkhart County and across the nation. He empowered his director of human resources, Lori Stanger, to work with the different departments across the company to find the areas with the right mix of need, willingness, and ability to take on a 16- or 17-year-old employee. In logistics, they found a fit.

“Graham was a perfect match for us,” said Travis Meyer, Neer’s supervisor in the logistics department at Kem Krest. “We needed another hand and he was willing to jump in and start right away.”

In his project manager apprenticeship, Neer is given key responsibilities related to tracking inventory from production to shipment and delivery. In the Q&A session, Neer admitted that logistics management wasn’t even on his radar as a career possibility before starting his apprenticeship, but he now plans to attend college to earn a degree in the field and continue working for Kem Krest well beyond the end of his commitment.

“I’ve learned much more in the time I’ve spent in the workplace than I ever have in the classroom,” Neer said during a Q&A session. “Sorry, teachers.”

“That’s OK,” Northridge High School Principal Andy Wood answered from the back of the room, “this was our idea!”

The HEA Summit was funded in part by the Community Foundation of Elkhart County, the Lumina Foundation, and New America.

“HEA thanks all of its partners who make this work successful and made this summit possible,” said HEA President/CEO Brian Wiebe.